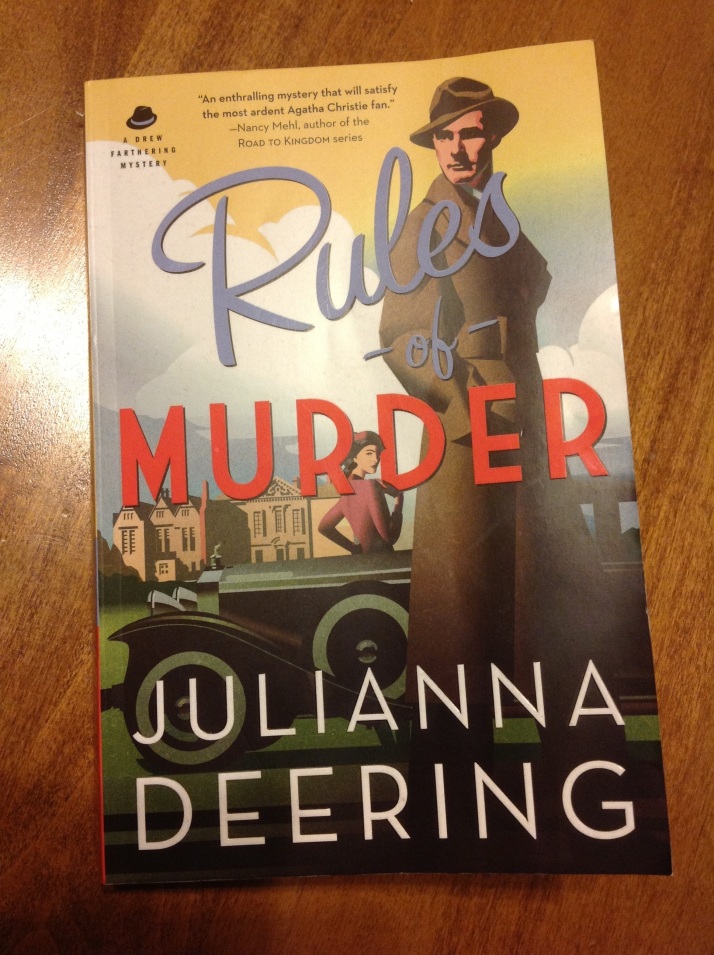 I have enjoyed reading mysteries since I was a child. I remember checking out all the Nancy Drew books during middle school, and then I discovered Agatha Christie’s classics during high school. Once I married, my in-laws introduced me to contemporary mystery writers, but I was still drawn to my mother-in-law’s leather-bound Agatha Christie collection. The murders in Christie’s books are ingenious and usually involve some element of deception. No matter how many of her stories I have read, I do not believe I have ever solved the crime before her main character. However, I had become accustomed to the faster pace, heightened suspense, and romantic element in the contemporary novels, so it was with great delight that I requested Rules of Murder from Bethany House to read and review, and I was not disappointed.

This first book in the Drew Farthering Mystery series is set in England in the 1930’s among a family of the upperclass with a few Americans involved as well. Drew Farthering is the charming main character, who enjoys reading mysteries and decides to try his own hand at detective work when a murder is discovered on his property. His friend Nick assists in solving the crimes but continually reminds Drew that this mystery is not following the “rules of murder” set forth by Father Knox in his ten commandments for mystery writers.

One of the interesting aspects of this book is the relatively young ages of the main characters. In most contemporary mystery novels, the main characters seem to be in their mid- to late thirties. In Christie’s novels, Miss Marple was in her seventies as I recall, and Hercule Poirot was at least middle aged. Most of the main characters in Rules of Murder are in their twenties, but Drew and Madeline seem rather mature. The introduction of Madeline Parker and her friends provides comedic and romantic elements, as well as a spiritual component. The religious aspect is not overdone, but we are reminded that the chief end of man is to glorify God and to enjoy him forever.

Rules of Murder contains an ingenious plot, and Julianna Deering breaks all the rules with her characters and their deceptions. I would highly recommend this book for any fan of the mystery genre.

One thought on “Rules of Murder by Julianna Deering”